we are more than happy to introduce our section for books in English to you! Although it existed from the beginning on, we were waiting for a row of titles to arrive in our office before we present you our English speaking programme. You can find all titles here: English Books

All titles presented here are also new on stock so you can find them also here: Neuzugänge

Judy Beishon – Changing The World – The Role of a Revolutionary Party 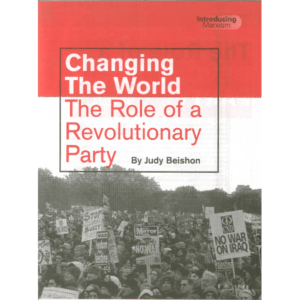 How exactly is capitalism to be overthrown and the transformation made to socialism? Lenin and his co-revolutionairies in Russia provided the answer at the beginning of the 20th century, by building the Bolshevik Party.

Discussion on the need for a revolutionary party and its form or organisation is very important today, especially as many young people regard themselves as „anti-capitalist“ and are interested in socialist ideas, but have a degree of mistrust towards political parties. 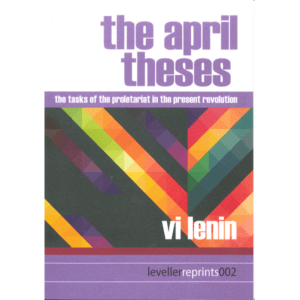 Lenin’s „April Theses“ was written when he arrived back in Russia in April 1917. He argues that the working class, leading the exploited peasantry, should take power and begin to carry out a socialist transformation of society. All other option would end with brutal counter-revolution.

Now new revolutions are taking place. Millions have risen up across the Middle East demanding democracy and an end to poverty. Imperialism is colluding with the national capitalist classes to ensure that no regime comes to power that threatens their interests. These ongoing revolutions demonstrate beyond doubt that capitalism does not offer a way forward. The main ideas outlined by Lenin apply just as much to Tunesia and Egypt today as they did to Ruissia in April 1917.

The momentous events in Liverpool 1983-7 sent shock waves across the country. Hardly a week went by without the city being in the news headlines. Financial crisis, a unique house building programme, education reform, the Heysel Stadium tragedy, the San Bond affair, the expulsion of Dereck Hatton, Tony Mulhearn and other from the Labour Party, through to an 18 month court battle which ended in the surcharge and disqualification of 47 labour councillors – all are covered in Liverpool A City That Dared To Fight. Not only a commentary, this book is also a penetrating political analysis of the growth and development of Marxism in Britain, and particularly the role of Militant in Liverpool.

Peter Taaffe – The Rise of Militant 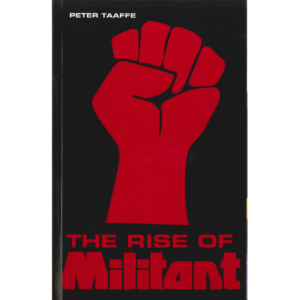 This is the first real account of Militant, its ideas, organisation and the role of prominent public figures associated with it.

Five previous books have been written about Militant. But this is the only one which gives an authentic account of how Militant played such a prominent role in Liverpool in the 1980’s and the successful battle to defeat the poll tax. 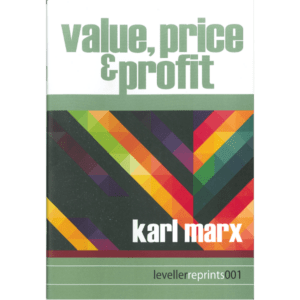 A speech by Marx to the First International Working Men’s Association, June 1965. Written: Between end of May and June 27, 1865; First published: 1898; Edited: by Eleanor Marx Aveling.

Although delivered as a speech, this paper remained unpublished until after Marx’s death. It reads like a condensed version of Capital Volume 1, and contains Marx’s essential arguments about the working of capital. Although we highly recommend reading Capital Volume 1 for a thorough understanding of capitalist economics, this volume provides an excellent introduction to Marx’s ideas. 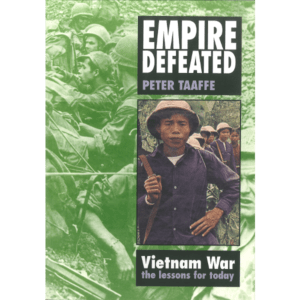 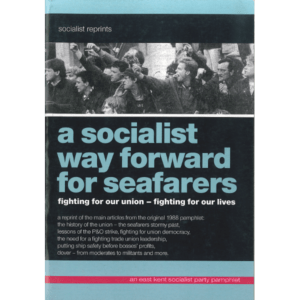 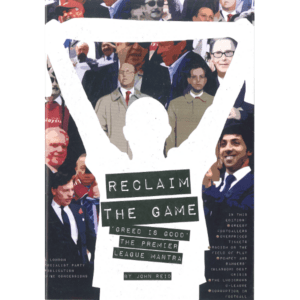 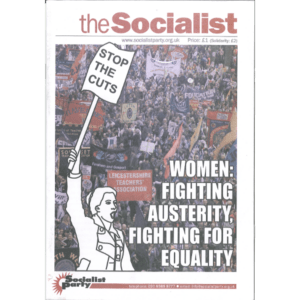 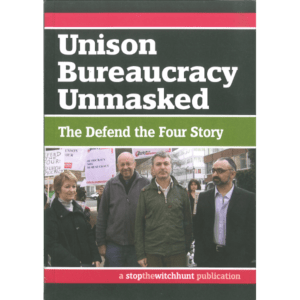 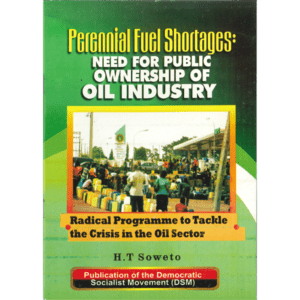 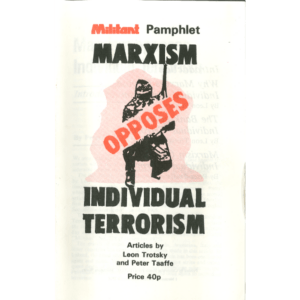 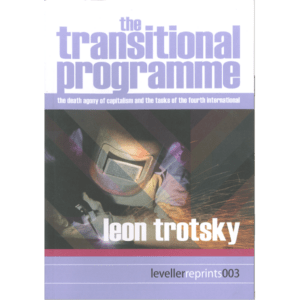 by Leon Trotsky is undoubtedly one of the most important works ever written by him. Here unfolds before us in all richness the application of the method of Marxism to the historical tasks of the workers‘ movement. It was written 1938 in preparation for the Second World War and its revolutionary consequences for the working class worldwide. But the approach adopted – despite some of the demands not yet being fully applicable today in all situations – if very „modern“ and relevant to struggles of the workers‘ movement today.

While it is described as a „programme“, it is not strictly this. It does, in fact, combine programmatic demands of the most important kind with necessary comment, points on perspectives for capitalism and the labour movement which could have been written today.

Leon Trotsky – The Class, the Party and the Leadership 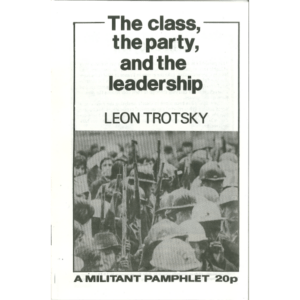 Ted Grant – The Rise and Fall of the Communist International 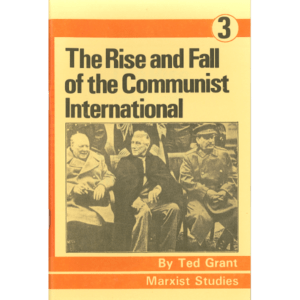 What happened to the Communist International established in the aftermath of the Russian revolution? Written in June 1943, this pamphlet is especially relevant today in light of the deepening crisis of capitalism internationally and the sharpeningof the splits in many Communist Parties internationally, between the old style pro-Moscow Stalinists and the „Eurocommunists“.

Peter Taaffe – South Africa: From Slavery to the Smashing of Apartheid 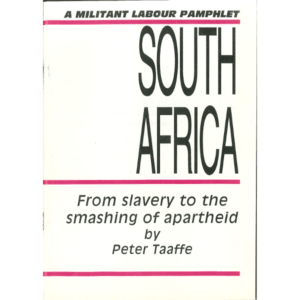 The end of Apartheid, marked by South Africa’s ever first elections, open to everyone, has inspired wokers and youth across the world.

Peter Taaffe explains how it was the determined struggle of the black working class which dealt the death blow to apartheid. Using interviews with workers in South Africa, he shows how they fought the vicious Inkatha organisation and state repression.

How as this achieved? What does the ANC government mean for the South African masses? What will happen next? 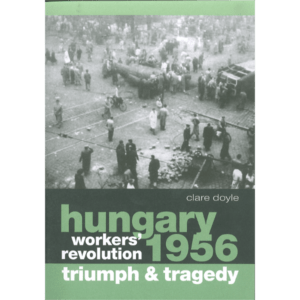 When workers rose in their millions

ON OCTOBER 30 1956, the withdrawal of Russian troops from Hungary was officially announced. Power was in the hands of the working class but, as so often in revolutionary situations, they failed to see it. The opportunity for sweeping aside the old politicians and their hated system of government came and went. The reins of power fell into the hands of other forces either not willing or not able to lead the mighty workers‘ struggle to a successful conclusion.

Clare Doyle explains the background to these inspiring events and the reasons why the Hungarian revolution was brutally crushed by a new ‚Soviet‘ invasion.

„THERE WAS such elation and excitement. People were almost insane! We felt free; we could say what we wanted.“ „It was great to be human, and even better to be a Hungarian in Hungary.“ „We had taken fate into our own hands.“ Such were the moving reminiscences of veterans of the October days, expressed in the BBC4 documentary Our Revolution.

But on 4 November their short-lived dreams were brutally shattered. The Kremlin’s ’second invasion‘ was under way. Thousands of tanks and planes, started a merciless bombing operation in all the major cities.

Revolutionary fighters – young and old – put up fierce resistance. They built barricades, fired on the enemy, hurled Molotov cocktails, renewed their all-out general strike and vowed to fight to the end. Just over 2,500 people were recorded killed, and tens of thousands injured at this time. But it seems likely that the toll is far higher. Working class strongholds were targeted and tens of thousands left homeless.

This use of overwhelming force, followed by a reign of terror and brutal reprisals against the workers and ‚freedom fighters‘ of Hungary for the ‚crime‘ of making a revolution. 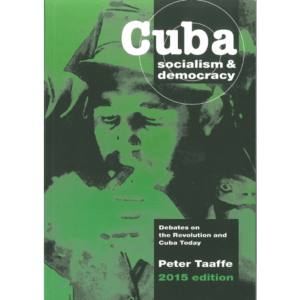 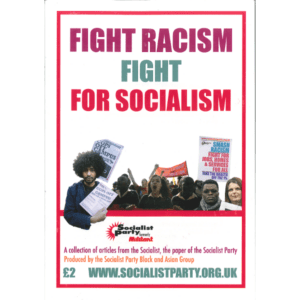 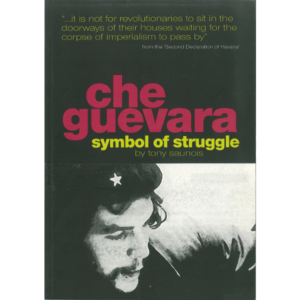 As the revolt against neo-liberalism and capitalism gathers momentum throughout Latin America the figure of Che Guevara has gained renewed popularity as a symbol of struggle against imperialism and capitalism and for a socialist alternative. In this book Tony Saunois follows the life of Che Guevara as a revolutionary fighter, his role in the Cuban revolution, discusses his ideas about guerrillaism and the attitude of Marxists towards them. These and the lessons from Che’s struggle for a new generation fighting for a socialist alternative form a central theme of this book. 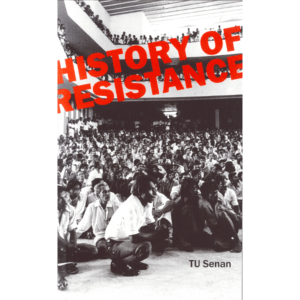 This book is intended to reveal the main contending forces that drove historical events in Sri Lanka – with the aim of developing a strategy and tactics for the struggle to come.